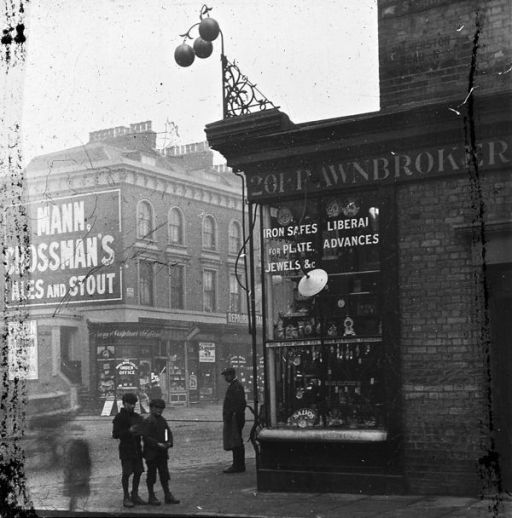 In 1871 Mr Tomlinson ran a pawnbrokers on the Kentish Town Road. Pawnbrokers served the whole community but mostly acted as a form of money lending for those unable to get credit elsewhere. For most people in Victorian London credit was very limited. Ordinary people didn’t have bank accounts as we routinely do today, and so lived week by week (sometimes day to day) on the small amounts of money they earned in cash paid work.

Rent, food and fuel consumed most of what they brought in and families were particularly at risk if they had children below working age (11-12 or under) and the mother had to stay at home to care for them. Many used pawnbrokers as a way of extending credit and coping with financial hardship. You could take an article of clothing, or some item of jewels (a watch say) to a pawnbrokers and pledge it against cash for a week. So long as you returned the money in the time allowed you would get your possessions back. If you did not then they became the property of the broker and he was allowed to sell them.

Pawnbrokers have not gone away but today they tend to be called something like Cashconverters and are a familiar sight alongside the fried chicken restaurants and betting shops on our depleted and decaying modern high streets.

On Monday 7 August a woman entered Mr Tomlinson’s shop and asked to pledge an expensive looking piece of jewellery. It was a ‘gold bracelet, set with diamonds and rubies’ and he estimated its value at over £40 (£1,800 today). Tomlinson’s foreman, Lewis obviously didn’t think the woman, Catherine Dickinson (a 48 year-old waistcoat maker who lived locally) was the sort of person to own such an item.

He wasn’t satisfied with her explanation of how she came by it so she promised to return later with her daughter, who had told her that her ‘young man’ had found it and had given it to her to pledge. About an hour later Catherine returned with Henry Benson, a 19 year-old cabman, who said he’d picked it up near a cab rank at Cremorne Gardens on the 22 July. The pleasure gardens were a fashionable spot for the wealthy (and not so wealthy) in the mid 1800s and it was entirely possible that a lady might have lost her bracelet there.

It was equally possible that Benson (or another) might have pinched it from her late at night or found it left in his cab,Either way he should have reported it to the police and handed the bracelet in but he hadn’t and the sharp actions of the pawnbroker had stopped him profiting from it. Pawnbrokers didn’t always have a good reputation and for over a century had been accused of facilitating the trade in stolen goods.

Tomlinson and his employee were no doubt aware of this and acted to make sure they weren’t tainted by the association with criminality. Mr Lewis reported the incident to the police and two detectives were despatched to make enquires. Detective constables John Dalton and Charles Miller of Y Division tracked down Benson and Mrs Dickenson and brought them before Mr D’Eyncourt at Marylebone Police Court.

The magistrate decided that both the young cabman Benson and his sweetheart’s mother should be held accountable for the potential theft of the bracelet so he bailed the former and accepted Catherine’s own recognisance to appear in a  week’s time. In the meantime the newspaper alerted its readers that the jewellery was available to view at Kensal Green police station in case anyone had recently lost it.

Presumably if no one claimed it at the very least Benson would be free to carry on as a cab driver, at best the bracelet would be returned to them and perhaps Mr Tomlinson would then be happy to hand over some cash (I doubt as much as £40 though) so the Dickensons could enjoy a bountiful summer for once.