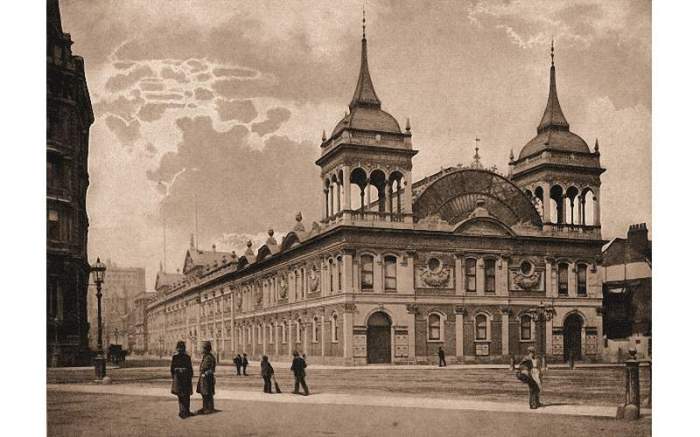 The 1890s were infamous for the creation of the ‘hooligan’ menace. The papers reported the antisocial behaviour of working class boys and young men, and their fights with rival gangs across the capital. These gangs of youths came from the poorer areas of London, like Lambeth (where Clarence Rook’s character Alf hailed from) or from Whitechapel or the rougher bits of Marylebone.

While they were dubbed ‘hooligans’ in London in the 1890s these sorts of youth gangs were not a new phenomena; there had been an ongoing public concern about ‘roughs’ since the 1870s if not earlier. In Liverpool ‘cornermen’ terrorised passers-by, in Salford ‘scuttlers’ had running fights in the streets. In 2015 I published an article about a murder at the gates of Regent’s Park, which arose out of a feud between two groups of ‘lads’ that claimed territorial ‘rights’ along the  Marylebone Road.

What marked out most of the public furore and moral panic about anti-social youth in the late nineteenth and early twentieth century however, was that it was entirely focused on young working-class men. The behaviour of the elites was rarely considered to be a concern, at least not a concern that reached the pages of the London and national  press.

So this story, published in Lloyd’s Weekly, gives us an interesting and unusual example of balance. Lloyd’s  was a broadly Liberal paper by 1890 although it did have more radical political roots, if not the radical beliefs of its early rival Reynold’s. It was a paper for the masses, not for the upper classes or well-to-do however, and these might help explain why it took this opportunity to point out the bad behaviour of those nearer the top of the social ladder.

The court reporter at Westminster Police Court chose, as his story for the day, to focus on the case of James Weil and Simon Skockock. Weil was a 23 year-old ‘dealer’ and his colleagues a diamond broker aged 29. Weil lived in St John’s Wood while Skockock resided in Compton Road, Highbury.

Neither were your typical ‘roughs’ or ‘hooligans’. They found themselves before a magistrate however, for causing a disturbance at the Royal Aquarium and acting in a ‘disorderly’ manner.

By 1890 the aquarium had been open for 14 years and was an interesting London attraction. It was built to stage plays and other theatrical productions but also to house art exhibitions, almost as a rival to the Crystal Palace built in Sydenham. As this interesting item from ‘know your London’ describes it was quite a different sort of venue:

The main hall was 340 feet (104 m) long and 160 feet (49 m) wide. It was covered with a roof of glass and iron and decorated with palm trees, fountains, pieces of original sculpture, thirteen large tanks meant to be filled with curious sea creatures and an orchestra capable of accommodating 400 performers. Around the main hall were rooms for eating, smoking, reading and playing chess, as well as an art gallery, a skating rink and a theatre (see Imperial Theatre below). The Aquarium adopted an expensive system of supplying fresh and sea-water from four cisterns, sunk into the foundations. This quickly ran into operating problems. The large tanks for fish were never stocked and they became a standing joke. The directors did display a dead whale in 1877.*

One Saturday evening in  June 1890 up to a dozen young men, including Weil and Skockock, were ‘perambulating the Aquarium’ in an aggressive and drunken manner. According to the report of Police Inspector Bird of A Division, they were seen to be:

‘pushing against people, flourishing walking sticks, and knocking hats off’.

Police and security at and around the venue warned them about their behaviour but were ignored. Finally some of them were ejected and the trouble spilled out into the streets. Some of them started to wander off, as instructed by the police, but Weil refused to nom home quietly. As a result he was arrested and as he was being marched off to Rochester Row Police Station his friends followed boisterously after him.

Skockock was the most vociferous  and when the police got fed up of listening to him he was also charged with being disorderly. The pair thus ended up in court before Mr Shiel the sitting magistrate.

Shiel waived away their attempts to say it was all something about nothing and that they had simply been arguing over the amount of bail that should exposited to gain their mate’s release. Nor was he sympathetic to the suggestion that they were simply ‘larking’ about. They were, he told them, ‘too old for that sort of folly’.

‘It is extraordinary to me’, the magistrate declared, ‘that the amusement and pleasure of other people should be interfered with by well-dressed roughs like you’, before binding them over in surety of £20 each for their good behaviour over the next six months, and asking them to produce others who would stand surety for another £10 a head. A failure to produce either would land them in prison for 14 days.

I doubt that it would have been hard for them to find the sureties or produce evidence that they themselves were ‘good for it’, but it was dent in their reputations. Had they been working-class roughs they might have gained some status amongst their fellows, but then again working class hooligans wouldn’t have been given the option to pay their pay out of gaol time.