In April 1891 (just two years after the success of the Great Dock Strike) John Carey was working on the West India Dock quays when he noticed William Pelling. Pelling was a tierman but he wasn’t part of any trades union. Following the 1889 Dock Strike over 20,000 men had joined the newly formed General Labourers’ Union and within a few years union membership in Britain reached 2,000,000. 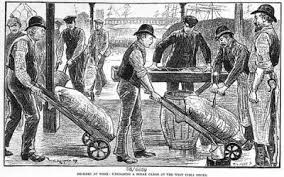 One of the leaders of the strike, John Burns, wrote of the long term effect that the experience would have on organised labour: ‘labour of the humbler kind has shown its capacity to organise itself; its solidarity; its ability. The labourer has learned that combination can lead him to anything and everything.’

The Dock Strike (itself partly inspired by the earlier success of the Bryant & May match girls) was a significant moment in labour history, but it had its fractious moments as well. Police reports (held at the National Archives in Kew) show that there were disputes about ‘scab’ labour and accusations of intimidation by pickets. The police were not above acting on behalf of the dock companies either and so (in the eyes of some) betraying their working-class roots.

William Pelling was not a union man and so Carey called out to his fellow dockers, urging them not to work with him. They took no notice of him. This angered Carey who confronted Pelling, punching him about the face and head and knocking him to the ground. The attack left him exhausted and quite badly injured. The court was told he’d lost a lot of blood and ‘both his eyes were blackened’.

The magistrate condemned the attack and told Carey that if ‘he and his friends thought they were going to dictate to others the terms on which they were to be engaged, they were very much mistaken’. Carey was sent to prison a month with hard labour.

2 thoughts on “Assault on the docks”